As we ramp up to our next major milestone, the Closed Beta, here are some highlights of the many exciting developments on In The Black! A tremendous amount of effort is being devoted to making sure everything is working as intended, while also improving the overall experience. In this update we’ll go into more detail on some specific features we think are pretty cool, and finish with a brief look at some of the things we’re doing to promote the game.

Over time we’ve gotten some great feedback from our backers, testers, and industry UX experts regarding our Basic Flight and Basic Combat tutorials. Consequently, we’re spending significant time updating the tutorials to improve the scripting, feedback, and flow, so that novice pilots can more quickly and effectively get the hang of things. We’ve even streamlined the Training Simulator program menu, as seen here. Note that the LAUNCH button now appears right next to the name of the program you wish to run. 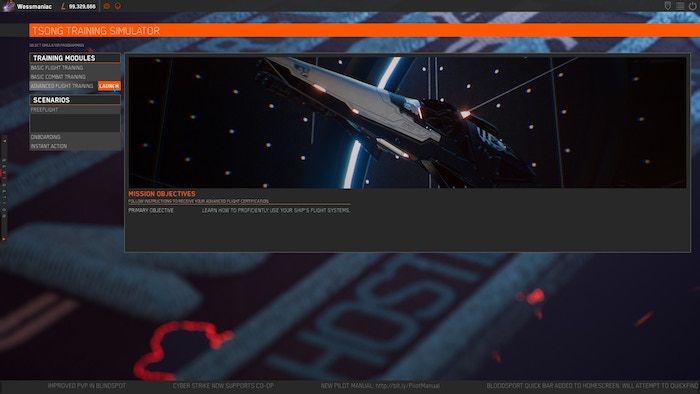 To address an issue commonly reported by new players, both tutorials now have more visual “landmarks” to help pilots orient themselves within the battlespace. As any student of warfare knows, “orient” is the second part of Colonel John Boyd’s famous OODA loop (Observe-Orient-Decide-Act). It is essential to effectively maintaining the pilot’s situational awareness.

External view of Shrike in training environment with “virtual asteroids”

Among the many approaches we’re considering are augmented-reality projections such as a celestial sphere, constellations that can be toggled on & off, flight path predictions, and others), as well as simply ensuring that there are enough objects in the right locations within each battlespace that pilots are able maintain their bearings. The latter approach is probably the most natural for most people to benefit from so that’s what we’ve implemented in the latest build. Future enhancements will pursue the more esoteric solutions.

Shrike maneuvering through a virtual version of the Atlas II hangar deck.

In the Basic Flight tutorial we’ve also added a challenge that demands more throttle discipline. This will help pilots prepare for missions that involve close quarters battles inside the hangar spaces, tunnels, and docking facilities of large bases and stations.

We mentioned the new missile cam in our last update, and now we’ve added even more functionality to the Ordnance mode of your MFD! Not only is it able to display the seeker view of supported missiles, it also shows the targeted object’s orientation so you can assess whether your missile will have an optimal target tracking solution. In addition, you can now adjust the zoom of the missile seeker camera for a better view at long range. In the example below, you can follow an engagement with an enemy Hyperion more than 10 km away. The pilot focuses on the MFD to follow the missile’s flight all the way to impact.

In the ongoing quest for ever better optimization, we’ve recently refactored how turrets calculate aim points and lead targets. Additionally, the logic that controls how a turret aims is now compartmentalized into its own standalone component, which we named the Turret Gimbal Controller (TGC). Storing the turret orientation logic in its own purpose-built component allows easy portability and implementation into anything that can use azimuth and elevation for aiming at targets.

Unreal Engine Dev Mode showing what this looks like in a programmer test environment.

Along with the modularization of the logic. We also updated the logic for calculating interception to account for a target’s acceleration over time. Previously, missiles presented a greater than intended challenge for CIWS and other gimbaled weapons, especially at ranges greater than 1km. The previous intercept logic didn’t properly account for the fact that missiles accelerate very quickly and will continue to do so until they either hit their target, miss, or run out of propellant. This resulted in projectiles lagging a good deal behind the target. With the new acceleration compensation the kill rate has doubled from about 30% to around 60%!

The next step we have planned for CIWS-based missile defense will add timed fuses for the projectiles of some capable weapon systems. Their high explosive rounds detonate at approximately where the target will be, sending shrapnel into the path of the incoming missiles to destroy or disable them. These shrapnel warheads won’t be very effective against well-armored targets, but will be very effective against missiles, especially when defending against tight salvos and saturation attacks.

We started work on improving our explosions and other visual effects in the game. This is something we’ve been wanting to do for a long time, and we’re now using JangaFX’s real-time volumetric fluid simulation tool, EmberGen to create some very impressive new explosion effects. EmberGen grants the ability to work on explosion effects specifically for games in real time which helps the artist focus on the artistic look of the effect, rather than being bogged down with render and simulation settings. While it’s not real-time simulation in the game engine, it greatly improves the speed and implementation of realistic-looking effects.

The International Game Developers Association (IGDA) is now producing an Indie Game Showcase on Twitch that is hosted by Will Overgard, aka Viking_Blonde. The first show streamed live on September 18, and In The Black was one of the eight titles highlighted. This proved to be another great opportunity to show off the game. The stream generated a lot of excitement, putting it on the front page of Twitch!

You can enjoy the full stream on YouTube (In The Black coverage starts at 29:37):

That’s all for now, but we’re going to be increasing the frequency of these updates, and you can look forward to pieces on call signs and in-game medals and awards in the near future, as well as the latest enhancements and improvements to the game! As always, please share your thoughts in the comments below, or join our community on Discord.

We use cookies on our website to give you the most relevant experience by remembering your preferences and repeat visits. By clicking “Accept”, you consent to the use of ALL the cookies.
Cookie settingsACCEPT
Manage consent

Any cookies that may not be particularly necessary for the website to function and is used specifically to collect user personal data via analytics, ads, other embedded contents are termed as non-necessary cookies. It is mandatory to procure user consent prior to running these cookies on your website.